EARLY LIFE
There are conflicting birth records.  However, Andrew Blackwell was probably born on 23 December 1893, in Warm Springs, Arkansas.

His father, William Bell Blackwell was known as a local merchant and a farmer.  He married Andrew’s mother Emma Earnest Hand in 1889.  And together, they had a large family.

In the late 1890’s, the entire Blackwell family relocated from Arkansas to the Osage Nation in Oklahoma, to take advantage of territories that were opening up to white settlers.  They settled in Hominy; where Andrew grew up…and where he called home.

Andrew Blackwell was 15 at the time of the 1910 census.  On the census form, Andrew and his older brother Robert were listed as farm laborers, and they were both listed as being able to read and write.

From contemporary accounts, Andrew Blackwell was inducted into the service on January 28, 1918 in Pawhuska, Oklahoma.   Within a few months, he had completed his expedited training with other fresh American troops, and he was assigned to the 58th Infantry Regiment, 4th Infantry Division.  With the European theater of war heating up, Blackwell began his journey to join the American Expeditionary Forces .

Making his way to the war front, Pvt. Blackwell was on board the British transport ship, the RMS Moldavia, when it was struck by a single torpedo from a German U-Boat, in the English Channel.   Andrew Blackwell perished on 23 May 1918 in the line of duty, along with 55 other American soldiers from the 58th Infantry Regiment.  Experts surmised that he and his comrades died instantly.  He was 24 years old.

MEMORIAL
The sinking of the RMS Moldavia had a profound effect on the newly formed 58th Infantry Regiment.  So much so, they forever added an image of a torpedo to their coat of arms, as a rememberance to the men lost.  The 58th Regiment would go on to have a long distinguished history in the U.S. Army.  But, the torpedo remains fixed on their insignia to this day.

Pvt. Blackwell  was the first known  resident from Osage County to be killed in action, during World War I.  At the time, Hominy, Oklahoma was a booming oil-town.  The loss reverberated through the community.  The people of Hominy would honor his sacrifice; when after the war, the local post of the newly formed American Legion was named the Andrew Blackwell American Legion Post No. 142.
(Note:  a generation later, 2nd Lt. Clyde M. Frazierwas also added to the post’s name.)

The original American Legion building named in his honor still stands today.  It is fondly referred to as ‘the hut’ by the local Legion members.  In fact, many of the surrounding buildings are contemporary to Blackwell’s time, and he would have no problem recognizing the neighborhood today.

Sadly, Pvt. Blackwell’s body was never recovered from the English Channel.  He was listed as “Missing in Action” or “Buried at Sea” by the U.S. War Department.  He is memorialized on the Tablets of the Missing (a high honor) at the Suresnes American Cemetery, in a tranquil suburb of Paris, France.  You can see a video of the Cemetery grounds (here).

The following photos of the Suresnes American Cemetery were taken in 2011, and they were graciously provided by Pascale Nedelec of Lyon, France;  on behalf of American Legion Post 142 of Hominy, OK. 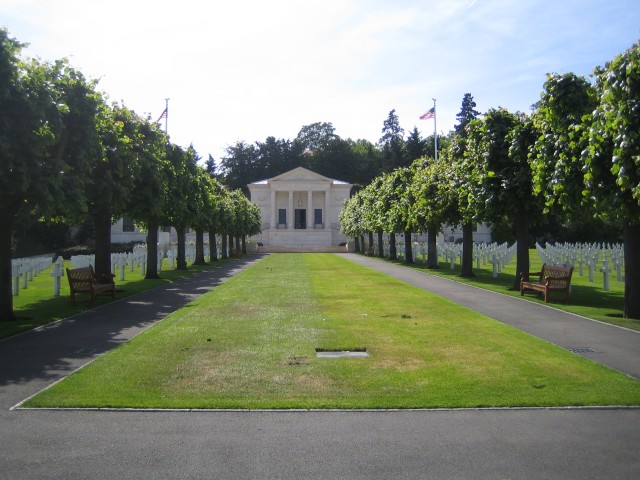 IN MEMORY OF THESE AMERICAN SOLDIERS WHO LOST THEIR LIVES IN EUROPEAN WATERS DURING THE WORLD WAR AND HAVING NO KNOWN GRAVES. Photo by Pascale Nedelec

Andrew Blackwell memorialized on the “Tablets of the Missing”. Photo by Pascale Nedelec

BLACKWELL’S FAMILY
The following is a list of Pvt. Blackwell’s immediate family at the time of his death.
It is based on the 1910 census information given by the William Bell Blackwell household in Hominy at the time; as well as other databases.  Siblings that were not part of the census are also noted.

A NOTE ABOUT HIS PARENTS
William Bell Blackwell (Andrew’s father) was first married to Mary Elizabeth Renfro, and records indicate that they produced four children.  Unfortunately,  Mary Elizabeth passed away in 1888.  Mourning her loss, William Bell married his second wife, Emma Earnest Hand (Andrew’s mother), in 1889.  In addition to the children from his first marriage, William Bell and his young wife Emma also had four children, who survived infancy.

Blackwell’s parents are buried in Cleveland, OK.
Available photographs of family headstones may be viewed
by clicking on the cross ” † “ following each associated name. 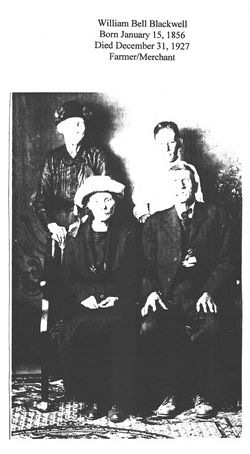 Please note: this article is still being researched. If you can help with any information about Pvt. Blackwell, please contact the American Legion Post 142.